Sandy Amerio during her concert War Songs at the Mac Val Museum. 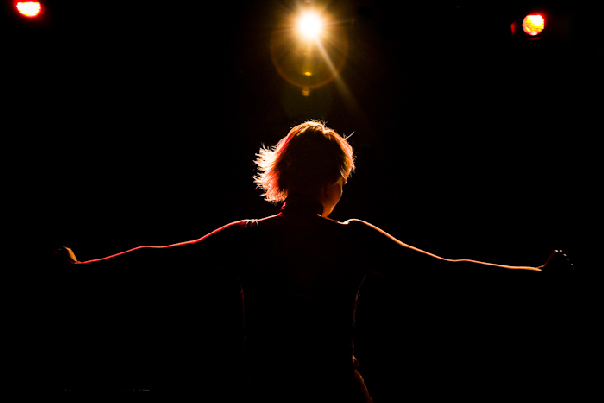 Though the history of relationships between art and economy is a long and complex one, with a range of forms that could rapidly be grouped under the label of economic art, from Marcel Duchamp's Monte Carlo Bond in 1924 to the entrepreneurial activities of Fabrice Hyber, it has been well-charted by many important exhibitions.

With Zones de Productivités Concertées, a series of twenty-one monographic exhibitions in three parts spread over the 2006-2007 season, it is a case of shifting the perspective. Combining artistic worlds that, at some point, bring economic questions into play (work, exchange, production, stock, activity, function, flow, the workshop…), it is not so much thematic expositions to which the visitor is invited, but a sideways analysis. The economy — its questions, its concepts, its thinking — is taken as a critical filter for some of today's artistic practices. The works of the artists invited are not set in some illustrative or mimetic rapport with the economic sphere. Complex and polysemic, they go well beyond these notions.

An amoral and romantic anthropologist of images and representations, Sandy Amerio deciphers the signs and schemas given out by society today: impact, resurgence, revolution. She analyses the way in which certain social phenomena help construct the world's collective and machinic unconscious.

How did you perceive the invitation to take part in this series of exhibitions based around economy?


Sandy Amerio: I like 'around' - very different from 'on' We're not sure, we're searching. It's a bit like describing a shape without drawing it. Applying oneself to the area, the field of research in question. Metaphorically too perhaps, it's like keeping a close watch on a fort one's about to attack. One polishes one's weapons. This is more or less how I saw the invitation. It coincided perfectly with my research and projects in progress.

In your opinion, where does the economic dimension of your work lie?


S.A: In the very first place some very practical questions must be addressed (as with any artistic work). How does one finance a project? What added values will this particular project generate? In terms of time, energy, social cohesion. How much is the project worth? What are the assessment criteria? What's more, I'm particularly interested in management, economic theories and the workplace. I see a certain poetry in them. For example, I've studied business storytelling, an Anglo-Saxon managerial practice.1 That led to the huge project 'Storytelling' (presented at the Espace Paul Ricard in Paris and the Laboratoires d'Aubervilliers in 2004) and to the publication of my first book2. I've also examined the economy obliquely in other films, such as Waiting Time / Romania (produced in collaboration with Alexis Davy) and Surfing on (our) History. In Waiting Time / Romania, the subtitle 'Romania is waiting for Europe' comes up fairly often. I filmed inside two French subsidiaries there: Lafarge and France Telecom. Economies of encounters with the Other. In Surfing, I featured my mother, who was always talking about the change in currency, the euro and her financial problems. I also shot Freine, Tiphaine Freine, which is about a go-slow at a factory, and Exiting the factory, with the workers of the OCT factory in Dourdan.


You've created a specific project for the exhibition. Can you tell us about it?

S.A: Recently, I've increasingly been dealing with issues relating to military strategy, and in particular what's known as PSYOPS3 hence the title of my proposition for the MAC/VAL. I'll be giving a concert. This is a new form for me I've written the texts that I'll be singing, and will be accompanied by Jean-Marc Montéra4 on guitar. All of my texts focus on the economy, war and love. And then a short film will be shown that was shot in New York around Fort Wadsworth on Staten Island.

With PSYOPS, your work seems to be taking a new direction. It's more 'sentimental' in a way. How do you think this film fits in to the rest of your work?


S.A: The question of distancing5 (in the Brechtian sense of the word) is very important to me. For example, in Surfing on (our) History, in which I put myself on stage, my family played themselves in the second part of the film. The emotions were there, but always at a distance, or at any rate they were in perspective. I quite agree with more 'sentimental' I try to put in more skin, more flesh. To be in empathy with my characters. To love them. The song written for Lynndie England exemplifies this new direction. It's difficult to feel compassion or have any close relationship with an image. Even more so when the image is one of a woman in the act of torturing or simulating torture. What can one say when faced with such an image? There's indignation obviously. Collective one. But indignation also prevents us from asking ourselves other questions, pursuing the story, considering the image from a more personal point of view, recharging the image in order to free oneself of it, exorcise it.

Broadly speaking, how would you define the backbone of your research in a few words?


S.A: I'm afraid I might be suffering from scoliosis. My research is quite eclectic. Some things do recur however. Narration and the constant search for different ideas and theories generated by society.

PSYOPS, storytelling, news items - what one might call extra-artistic phenomena - are the driving forces behind your projects. How do you link this quasi-anthropological interest with the artistic domain?


S.A: As far as I'm concerned, these extra-artistic phenomena are not dissociated from contemporary questions of aesthetics. Categories and the division of knowledge prevent us from thinking through the world and from adopting a critical point of view. Every individual thing is linked to another, firstly to its opposite but also to whatever resembles it, right down to the tiniest of differences. Bonds, tensions and lies fascinate me, be they real or totally fictitious, analogical or metaphorical. That's one of the reasons I adore urban legends. Bonds are to be found everywhere, but it's interesting to draw attention to some of them so as to restore some meaning to things. Recharge. It's a mystical quest. Somewhat illusory and never ending. One can't embrace everything, give a meaning to everything.

It's true, it may seem strange, but you will never hear words such as 'post-modernism' or 'avant-garde' coming from me. It's a vocabulary I don't use; it doesn't work for me. I don't think 'from' the aesthetic field; at least, I should say, not from the contemporary art field, which is a setting rather, a context, modes, tendencies, l'm familiar with, but it isn't a vehicle. It's not simply a case of feeding my practice with varied pieces of knowledge, but of reinvigorating, recharging the fields of research in relation to one another. I think, today, this tendency is be found both on the level of society and in research in the broader sense. What is quite interesting is that this happens through fiction. To give an example, Francis Affergan6 is trying to breathe new life into ethnology through the introduction of narrative principles. Christian Salmon explains this very well when he talks of the arrival of neo-capitalism and with it a 'narrated' or 'storied' individual7 who little by little will replace the exploited, dominated or simply alienated individual. What will be interesting to see is which stories will be told and for what purposes.


1 A managerial practice that consists of telling stories to managers in large company groups so as to produce certain emotions and thoughts in order to get them to accept redundancies or relocations.

5 'The principle of the processes of distancing consists in making one aware of an object, character or process and at the some lime making it unfamiliar. The object becomes strange. Distancing 'consists indeed in destroying identification. The objective sought is to prompt the spectator into distancing himself in relation to the reality shown him, to appeal to his critical mind. The aim is to sharpen one's consciousness. Distancing has a political effect of disalienation (not that answers are forthcoming, but rather due to the fact that it reveals the basic characteristics of the attitudes orchestrated by spectacle). Distancing might also be likened to laying a process bare. It is a case of destroying illusion by emphasising the constructed nature of the reality represented.' Bernard Dort, on distancing, in Lecture de Brecht. Paris, Seuil, 1960.

7 New edition of Verbicide, to be published in March 2007, Actes Sud 'Babel'.