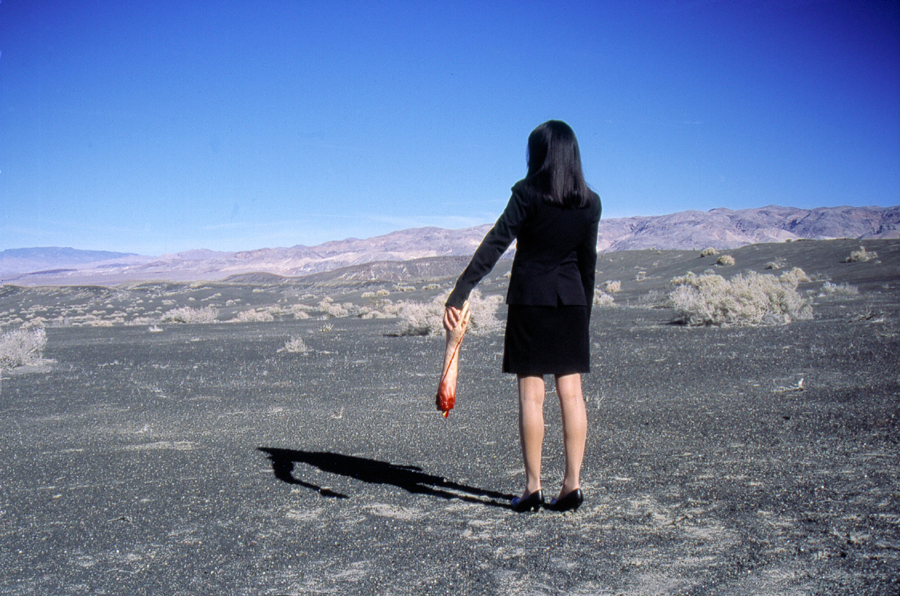 A storyteller tells a story to managers in order to lay them off.

Sandy Amerio revisits the signs and codes of our society, constructing, as they do, the collective unconscious through films, photographs, installations and writings. The artist takes up socio-economic and political issues, and deals with them in a reticular, net-like way.

In Hear me, children-yet-to-be-born, an experimental fiction film made in 2004, Sandy Amerio uses 'business storytelling' writing techniques-this being the art of transmitting and convincing through the power of stories. Hear me, children-yet-to-be-born is a movie shot in the United States amid the apocalyptic scenery of Death Valley, where a manager tells an imaginary gathering of people the story of his latest business trip to the Dead Sea. The narrative has just one goal: to fire the employees listening to it. The tale is a cruel and violent one, with several frames of reference: company passwords, managerial language, authoritarian orders linked to 9/11, the story of Lot from the book of Genesis in the Old Testament-all formats of discourse rooted in the collective American unconscious.

The story is based on the simple outline of Lot's tale, when he fled Sodom with his wife. The successive narrative digressions of the voice-over (Black Sifichi) combining several forms of rhetoric (managerial, religious, amorous) are based on the linchpin sentence: "Don't look back, just keep going", yelled by firemen to New Yorkers during the attacks on the World Trade Center. A whole system of signs and analogies is set up, creating powerful, not to say traumatic, mental images, out of sync with the images which do not at all seem to represent what is being recounted. The artist-cum-storyteller thus tests the spectator's capacity to understand the purpose of the narrative and disarms his critical faculties by addressing in the first instance his emotions, while at the same time hampering identification with figures who evolve as if in a board game in the different Death Valley settings (Brechtian distancing effect). Hear me, children-yet-to-be-born is above all, in this sense, a 'camouflage-film' infiltrating new uses of the company's organizational and emotional management. By immediately ruling out the documentary form, Sandy Amerio sets up a performance like test by getting to the core of the 'storytelling' technique, in order to reveal its mechanisms.

In her book Storytelling, sensitive index for non representative agora1, published in 2004, she re-appropriates this praxis and applies it to the arena of contemporary art. The book's action unfolds during a cultural event. Several fictitious characters, one more oddball than the last, intervene to talk endlessly about the artist's position in society, and the best strategies to adopt to sell yourself.

Extract from the catalogue Crossing Values of the Biennale d'Art Contemporain de Rennes. 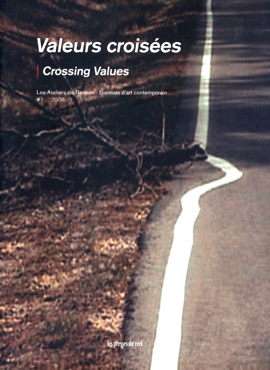 1 Managerial practice that consists to tell stories, tales to employees in order to generate certain types of behaviors and emotions. Storytelling works on the principle of metaphors and analogies, and has multiple applications: conflict management, outsourcing, layoffs…

IT HAS BEEN SAID

"French video changes the bottom line. Hear me perplexes as much it provokes. It will stick in the brain long after the latest Hollywood blockbuster is forgotten. Amerio mingles documentary filmmaking convention with video's potential for delicious ln-your-face eccentricity.
Peter Goddard in Toronto Star

"An uncompromising work that denounces new managerial approaches in the United States. The author thinks big and as open-hearted on new organizational methods and their management of emotions."
Muriel Steinmetz in L'Humanité