PSYOPS > You are not photogenic Lynndie 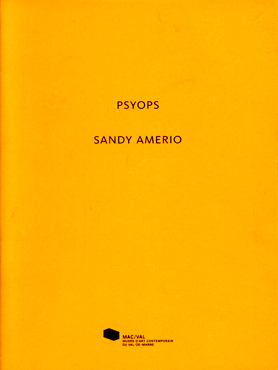 Social anthropology?
Sandy Amerio's work is protean. Videos, photographs, installations, soundtracks and performances herald the psychological mood of her films, but above all they are the tools of her work, of her artistic and discursive procedures.
Adopting the distant but not objective attitude of the anthropologist, Sandy Amerio examines the signs given out by contemporary society, feeding on psychological, sociological and economic approaches. The subjects of her studies are: the processes by which our beliefs are constructed; the permanence of the myths that structure and innervate the collective unconscious; and situations of domination such as the market economy, paid work, romantic relationships and media image.
But the artist's approach cannot be reduced to a scientific method. It is bound by a project, not a social one, but an intellectual (or aesthetic) one, a political one even. How can we analyze the images that surround us and touch us yet do not, for all that, affect us? How can we learn the lessons of the H(h)istory that is slipping past us if we are not even aware of our isolation? Depending on its emotional charge, the image conveyed by the mass media, television, the press and even cinema is consumed with fascination or, on the contrary, at an ironic or cynical distance that borders perhaps on indifference. In each case, domination or submission, the 'receiver's' emotions are intensified and manipulated, and any critical space disappears.
Deleuze: "The modern fact is that we no longer believe in this world. We do not even believe in the events that happen to us, love, death, as if they only half concerned us. It is not we who make cinema; it is the world which looks to us like a bad film."1

(Re)enchantment
" You are not photogenic Lynndie.
Your grimacing face looks like a little gargoyle.
You are so ugly.
Waddle. Waddle.
Smile Smile.
No Lynndie you can't do that to me. Not to me.
We knew each other for too long.
I know all your family, your thoughts, your fears, what you aspire to, little creature.
Do you apply your violence to me?
What do you want to tell? Speak!

The photographs of Lynndie England, the American soldier who perpetrated acts of torture and humiliation in the Abu Ghraib prison, were the starting point for a multiform work and they opened up a fresh line of research PSYOPS,2 a doctrine and form of military management of perception and emotions.3 It is a variation on the theme of domination.
It would seem the encounter with certain images is sometimes difficult, because the human that one is face to face with is beyond anything one could imagine. One tries therefore to shift the emphasis, to keep at a distance, to tame the image, in order to establish the possibility of a perpetually delivering recharge.4
How, therefore, can one distance oneself from the violence of these images Perhaps by putting oneself into the context of a non-sympathetic subject, aware of one's status as an observer. Sandy Amerio proposes to re-enchant the image, that is to say, recharge it with wonder and fascination, so we may be seduced by a reinvented tale, another possible ending.
"You are not photogenic Lynndie." From a subject of anthropological study, Lynndie England becomes a character in fiction just as the scientist, as a subject, is necessarily immersed in the society he is studying, Sandy Amerio takes up her place in the story she tells, speaking intimately and personally to Lynndie. "No Lynndie you can't do that to me. Not to me/ We knew each other for too long." The processes of distancing and identification coexist, reconciled.

An amoral story.
Re/enchantment does not necessarily summon the form of the fairy story. Good and Evil, the main protagonists of the magical tale, embodied by the princess and the witch, are not quite so clearly contrasted in Sandy Amerio's tale. However, the moral impact of the story, which relies on, the reader's capacity to identify with the hero, seems to be at stake here. The artist sympathizes with Lynndie England, through pity or compassion perhaps. Assuming it is a question of a form of catharsis, relieved of its moral intention, Sandy Amerio's project is to take us into a tragic tale, where feelings of pity and fear no longer bring about a purging of passions, but offer the individual a possible reconnection with reality and humanity at its most terrible and wonderful.

2 PSYOPS, or psychological operations: 'An American military doctrine and terminology describing political, military and sometimes even civil actions consisting of "shocking" and "subjugating" the population of an enemy country through the diffusion of false images or rumors' (Sandy Amerio).

3 Chakhotin's theory (1952): the success of propaganda depends on the skill of the propagandist to associate one of the themes developed to emotivity and to one of the four of the human being's major drives (aggressiveness, material satisfaction, sexual desire, parental love). An individual subjected to these drives will act unconsciously in accordance with whatever is dictated to him.

by Frank Lamy and Julien Blanpied