A unique experience of re-enactment
by Séverine Cauchy 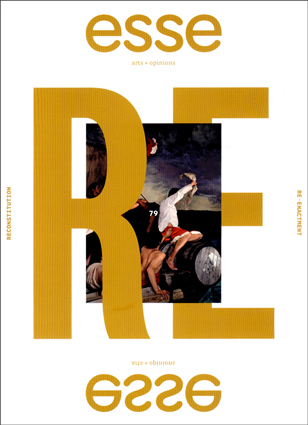 The first few minutes of Sandy Amerio's film Dragooned (2012) situate the viewer in familiar terrain — that of archival footage, specifically, a series of newsreels called "United News," produced between 1942 and 1946 by the U.S. Office of War Information. This government agency managed propaganda and promoted patriotism in order to convince Americans of the necessity and validity of the war being waged across the Atlantic.


Black-and-white images with a classic voice-over; film stock showing the effects of time; blurred, shaky images taken by a shoulder-held camera — the sounds and images in these propaganda scenes conjure up a heroism belonging to a distant past. Viewers readily accept that they are watching a historical documentary relating a little-known event from the Second World War: the capture of Le Muy in 1944 by the American soldiers of the 509th Parachute Infantry Regiment.


But this viewing position is suddenly disrupted by a rewind effect: the images on the screen become colorized and are re-shown in reverse, going back in time. It is the first in a long series of disruptions-the voice-over that initially provided jingoistic commentary takes on a life of its own, switching from American English to French, while surreptitiously adopting the familiar modulations of television narrative style. The voice mutates, becoming contemporary and autonomous, abandoning its former register to become increasingly personal. The voice is now present in the texture of these images from the past. It feeds off them and casts doubt on the scenes unfolding in reverse, undoing the viewer's initial impression, dispelling the illusion: this archival footage is not what it seemed to be. Viewers who thought they were on so lid ground are suddenly disoriented, having to adjust their perspective according to a new set of codes. It is precisely this disorienting effect that Sandy Amerio is after: "Stories where there is a reversal, where what you thought you were seeing turns out to be completely different from what is actually happening."


From the outset, the artist intended Dragooned to be a "camouflage film" where viewers are required to revise their own projections. The camouflage technique has a destabilizing effect: what viewers see and hear no longer belongs to pre-established categories.

After this second part of the film, there is a second set of credits, marking the end of the movement back in time. The images once again proceed in chronological order, more slowly, and follow the progression of the voice, advancing without cover. The voice becomes bold and casual. Its outspoken discourse is peppered with unsavory remarks and clearly extremist islamophobic statements that brutally plunge viewers into the contemporary society to which they belong. No longer protected by the barrier of History, they suddenly feel a certain malaise. Through the semantic and visual inconsistencies created by the artist, the viewers slowly become acutely aware that the scenes unfolding before them are not archival footage at all but contemporary images. Extracted from a historical re-enactment, these images are in fact an illusion.

The popular practice of re-enactment, consisting of playing out historical scenes, is the raw material for Sandy Amerio's film. Since 2010, as part of the F for Real research program at the Ecole Supérieure des Beaux-Arts de Nantes Métropole, the artist has explored the complex ties between fiction and reality by examining the practice of re-enactment by its actors, known as re-enactors. She started her research in Japan, where she met Hiroki Nakazato, a well-known Japanese "global re-enactor" who travels the world to reconstitute acts of military prowess. This marked the start of a two-year photography and video project that allowed Amerio to discover a milieu that is usually off-limits to outsiders.

For her 45-minute documentary Dragooned, the artist chose to follow a specific group of men who used to be or are still soldiers. A distinct category among re-enactment experts, these individuals are known as "hard-core re-enactors." Their concern for capturing the authenticity of specific historical periods requires a significant commitment in terms of time and money, as they carefully select uniforms and accessories, and study the behavior, attitudes, and gestures to be adopted. In July 2010, Amerio offered these re-enactor soldiers an opportunity to carry out one of their favorite historic re-enactments — the capture of Le Muy in Provence — in front of her camera. Careful not to include any anachronisms or visual giveaways, Amerio remained true to her artistic purpose. Totally immersing herself in the workings and logic of the re-enactment, she defined the precise perimeter of her field of action, making her film "a closed environment where the conditions of a re-enactment, with everything that this implies, was recreated, fully respecting the vision of the re-enactors, with no off-camera elements".

This fictional creation allows viewers to abandon the initial propagandist vision of History to discover another version — that of the group of re-enactor soldiers and, predominantly, that of the troop's leader, a soldier who "faced with demotion, invokes a parallel heroic narrative in an attempt to reconnect with the vital strength and faith he has lost" as stated in the film's synopsis. Amerio conducted several interviews to gather this living testimony of which she refused to change a word, no matter how hocking it was. The images to which viewers attributed a degree of historic veracity thus insidiously change in status, becoming charged with meanings rooted in a xenophobic discourse indicative of a certain facet of our contemporary society.

Sandy Amerio creates complex intertwinings between past and present, and between the re-enactors and the men they are embodying, which preclude any type of dualist vision. This is the particularity of this re-enactment stage, by the artist. Nothing is fixed; everything oscillates between advancement and retreat, the private and the collective, History and personal histories, past and present, true and false, empathy and rejection. The re-enactment guides the viewer to the cross roads of these contrary movements, without allowing any one of them to be isolated. This is Sandy Amerio's signature approach to apprehending the real. By looking at "a single problem from different angles" and mixing up "fictional laws that might have meaning on another scale," the artist creates frictions or "disjunctions" on which she feels it is necessary and vital to focus. Through this re-enactment, this fiction in which Amerio immerses the more-or-less consensual viewer, she makes use of these disjunctions on several levels.

Dragooned is a fictional playground in which several interpretive leads intersect. A documentary on re-enactment, the film records an event from the past (the capture of Le Muy), at the same time shedding light on our own era. Skillfully orchestrated by Sandy Amerio, this oscillation between documentary and fiction allows for an intertwining of genres in order to better examine the specific details of each. What we are given as an authentically documented event is at the heart of the fictional structure, while, in a simultaneous re bound effect, the foundations of fiction construct and sustain the documented fact to come, that which will make History.

Amerio's main protagonist, the French soldier who plays a character from the past in order to come to terms with his personal history and flagging career, and also to satisfy his desire for recognition, encapsulates questions of identity tied to a personal situation that is inextricably linked to and conditioned by socioeconomic strata. The questions raised by the moving time frames and nascent identities make the practice of re-enactment a tool of political enquiry, where notions of private and public space intersect so that a semblance of meaning can emerge from the chaos. Sandy Amerio uses re-enactment as a tool with the potential to lend meaning to a reality that seems cruelly devoid of all meaning.

The re-enactment which Amerio appropriates for a period of 45 minutes allows her to elude the passage of time for a few instants, leaving us free to construct a unique perspective on events past, present, and future. In the maelstrom of the various visions conjured up by this film-stories both personal and universal, real games of make-believe — the unique perspective that emerges clears a path toward that which is common to us all, toward the specific beings who we are and the very fact of being: "the astounding fact, the only real fact, that things exist, that anything exists, that being is the authentic soul of all the arts." Through her resolutely non-linear approach to time and History, Sandy Amerio drives us into a corner. Although this position is unsettling, she offers us a vision of the real without pretence.